Okay. Okay. So  I told folks I would be back from my blog hiatus in 2021. Clearly there was a little delay, but I'm here now!

Back in 2022! Focusing on creating connections with students and connecting them to their education as a school counselor.

For my welcome back post, I wanted to share a simple object that has helped create strong connections with students in my middle school counseling office.

It sits in the middle of the table in my office with some other fidgets. 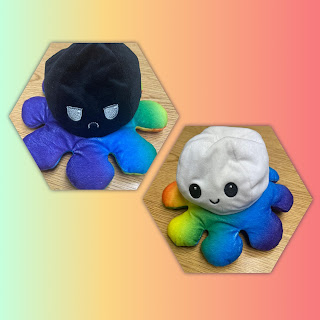 Last year, the  first student to notice the octopus was a 7th grade non-binary student. I was asked to speak to the student because several teachers had reprimanded them in the hallway. The student, upset, ignored the teachers and walked away from them. When I went to get the student from class, their body language told me they were not interested in talking with me, but they did walk with me to my office. As the conversation began there was lots of shoulder shrugs and head nods. Then!! They reached for the octopus. They turned it to the frowning side and whispered "I feel like this." Then they flipped the octopus inside out to the smiling side and whispered "But I want to feel like this," with a tear rolling down their cheek. I worked to help name those feelings with the student. And Then!! They began opening up and sharing all the challenges they were facing at home and at school.

This year a student who I see on a regular basis typically plays with various fidgets that are in the middle of the table in my office. One day he picked up the octopus instead of the other fidgets, flipped it to the frowning side and said "I feel like this all the time." It opened up a conversation that led to him sharing he had been having suicidal thoughts.

And there more stories of connecting with students, similar to these, all because of an octopus plushie.

This simple object that I bought on a whim because it was cute (but I wasn't sure if my middle school students would even engage with it) has helped create some strong connections between me and my students and my students with their feelings. Turns out this simple object has allowed my typically "scared to share any feelings" middle schoolers a safe way to tell me how they are feeling. It has opened the door numerous times for students to begin acknowledging and naming what they are feeling and it has made my office an even safer space for my students to be vulnerable.

The octopus reversible plushie (and other characters) are available on amazon: The Original Reversible Octopus Plushie

Posted by The Connecting Counselor at 7:36 PM No comments: